What do you need to know about "Shalom on Szeroka Street"

"Shalom on Szeroka" first took place in 1991 as part of the Days of the Jewish Kazimierz.

It is quite easy to count – in 2021 this concert will be held for the thirtieth time again! For all these years the Shalom on Szeroka has become an institution in itself – the most recognizable of all the Festival events, the key project and even our flagship! This is so much so, that for many people, the Shalom means the whole Festival: they do not even suspect that this is a culmination of a 10-days’ long event! A child outgrew the parent :)

It is no less that case that people from the whole Poland, and from many countries of the world, come here to spend 7 hours listening to Jewish music from Israel and Diaspora, filling each square meter of the Szeroka street with their joy.

For this one special night this street in Kazimierz becomes the beating heart of the entire Jewish world! 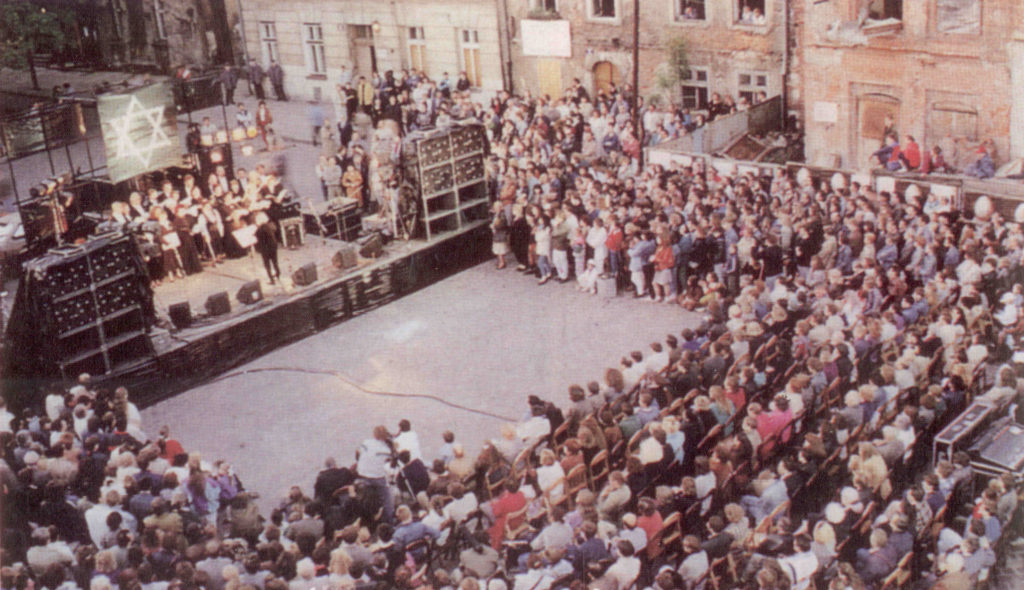 At the beginning the stage was at the Remuh synagogue with a number of chairs for the public standing in front of it but soon after the stage was moved to a location outside the Old Synagogue, the chairs disappeared as too many people needed place to dance.

The Polish Television joined us as a partner and so Shalom on Szeroka became accessible to millions of Poles. And then – thanks to online broadcasts – to millions of people around the world.

Shalom was the first open-air concert in Krakow, and maybe in Poland, which was broadcast live online!

The concert has been hosted from the beginning by Janusz Makuch and Krzysztof Gierat, co-founders of the festival, but when TVP joined us, there were other presenters apart from them, and this list is really impressive!

Janusz’s longtime companion here was Jolanta Fajkowska – she co-announced this concert with him for at least a decade and many of us still hear her words, “Hello and Shalom” with which she greeted the audience, when coming on the stage.

Later on, each year brought a new partner for the announcer: Alicja Resich-Modlińska, Anna Popek (for two years in a row), Marcelina Zawadzka (she made her debut at such a large concert), Marzena Rogalska (Janusz persistently called her Katarzyna), Agnieszka Woźniak-Starak (then Szulim), Grażyna Torbicka, and for the last two years – Anna Popiel has been sharing the stage with Janusz.

There was also one man accompanying Janusz – Tomasz Kammel – it was thanks to him that the announcer of the Shalom had then his first selfie photo with the audience. 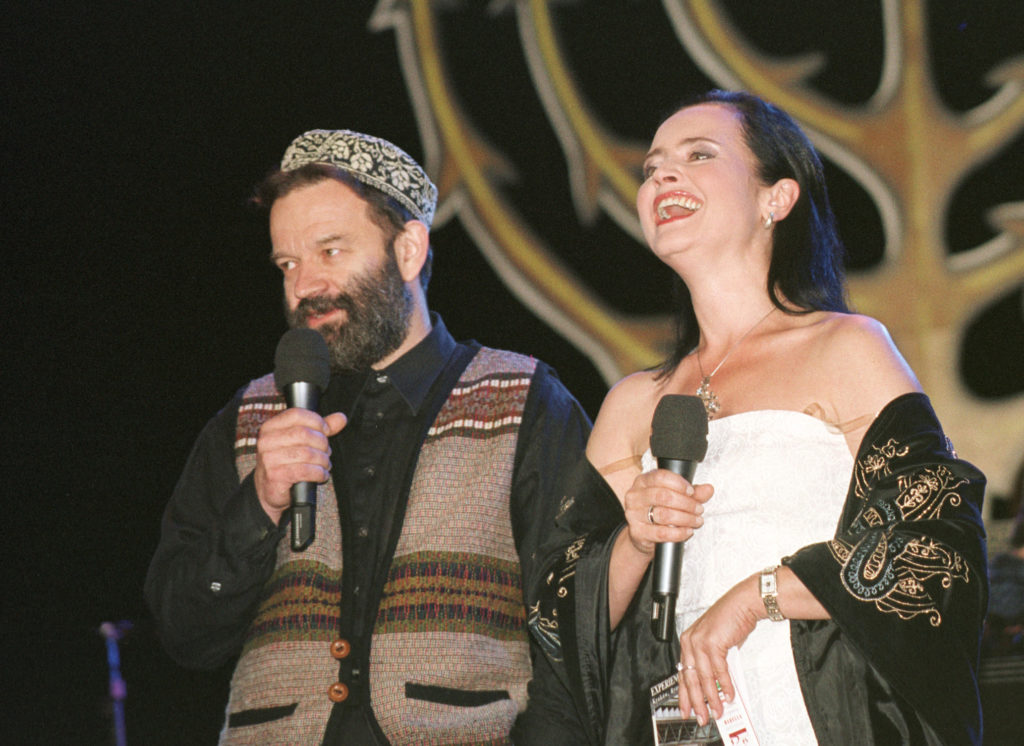 Only few years ago, an important element appeared in the script of the concert, namely Havdalah. 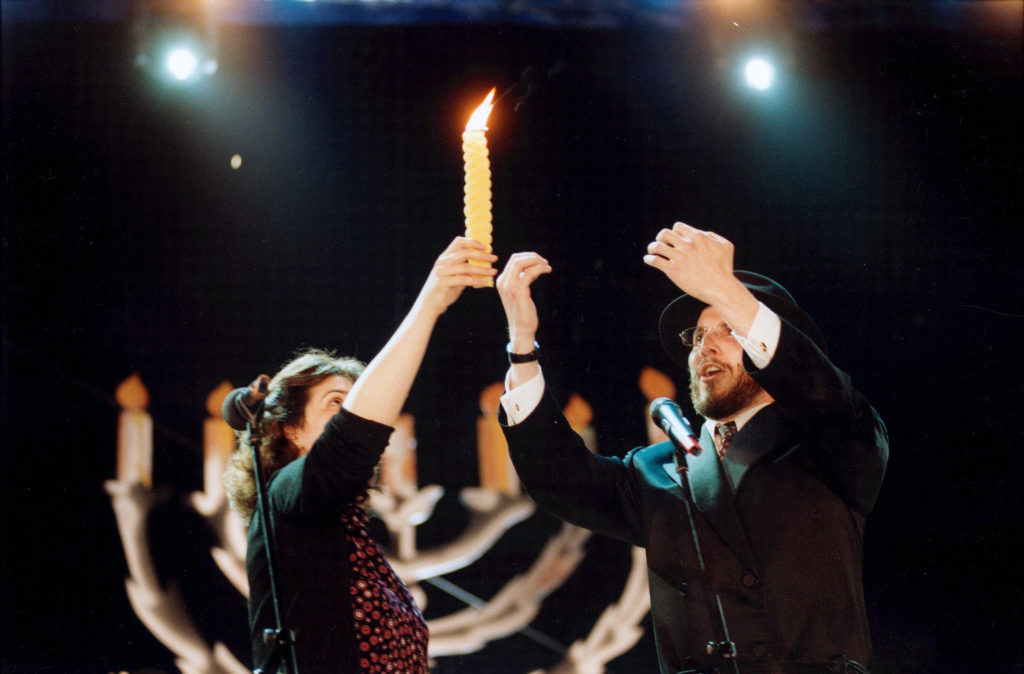 For the concert audience of 15,000 this ceremony of closing the holy Shabbat time and starting a new week has often been the only opportunity to experience the Jewish ceremonial.

Havdalah, was performed for the first time on stage during the 12th Jewish Culture Festival by Jonah Bookstein – then an envoy of Lauder Foundation, a yeshiva student, and today already a rabbi – together with his wife.

Later on, the ceremony was not celebrated for some time, to return later – from the 21st Festival onwards as a permanent element of the concert.

Havdalah complements the atmosphere and drama of the entire concert – it will always be there, because Shalom on Szeroka is not only fun, it also has a spiritual dimension, which definitely makes the concert unique. As Janusz Makuch said, When you light the Havdalah candle on stage, you relight the Jewish life in Krakow’s Kazimierz.

Another element on this largest Jewish stage in the world is the JCF Award – 'The Voice of Joy and Deliverance'. First ceremony took place in 2009.

The award goes to those who, in accordance with the mission of the Jewish Culture Foundation preserve the cultural heritage of Polish Jews, both in material terms by co-financing our operations and in the ideological sense by inspiring the festival and expanding the reach of our mission to new recipients.

The following people received this award from Janusz Makuch:

Also during the Shalom concert, a “Friend of Israel” award was presented to Janusz!

On the occasion of the 70th anniversary of the foundation of the state of Israel (2018), in each country one person with the greatest merits for Israel in cultural activity was chosen. In Poland, Janusz Makuch was such a person, and he received an honorary diploma with a letter from the President of Israel from the hands of Anna Azari, the Ambassador of Israel to Poland. This became also the occasion for a private meeting between the JCF Director and the President of Israel.

And who is behind all these?

Few people realise, however, that this whole machine lasting many hours operates so efficiently and smoothly thanks to one man. And it is not Janusz as you may have thought.

The man who can refuse access to the stage to any VIP if they were late or force David Krakauer to stop his spectacular circular breathing, who can go to the centre of the stage with a missing instrument so that TV cameras don’t record it, and musicians don’t notice…this man is Marek Grochowski, the only and unquestionable Head of the Stage.

And another person who in turn remains unmoved no matter what like a rock comparable to Saint Peter, who can stave off the spectre of an approaching hail storm with just one phone call but who can also stop the concert half way through with the same phone call is Marek Suszkiewicz, Concert Producer.

To give you just one example, one out of a thousand; when the ecstatic crowd dancing to the rhythm of Balkan Beat Box broke through Impel security agency barriers like a tsunami wave and burst on the stage and their frantic prancing and jumping almost led to its total demolition, his dispassionate phone call to Janusz, The Municipal Warden have called to say we can be heard in the furthest parts of the city and the Firemen are already getting their hoses ready not only made the terrified Maciek Fryc (head of the technical team) turn down the volume considerably but also just seconds later had Janusz blessing the audience and bidding them farewell thus averting the ghost of a spectacular disaster…, though Marek himself swears that he doesn’t remember anything. 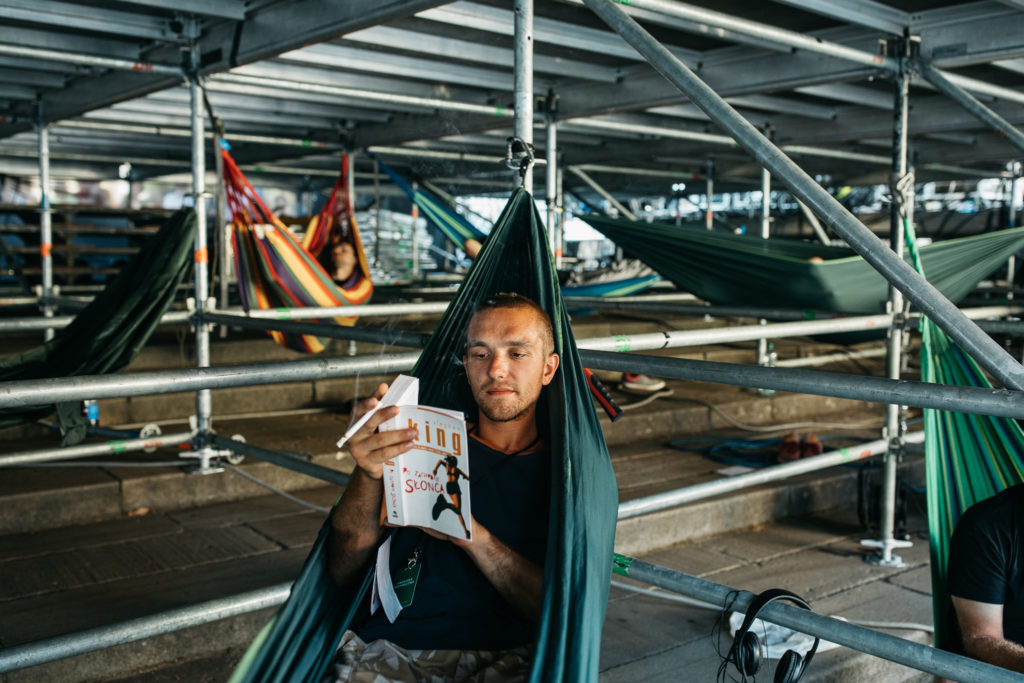