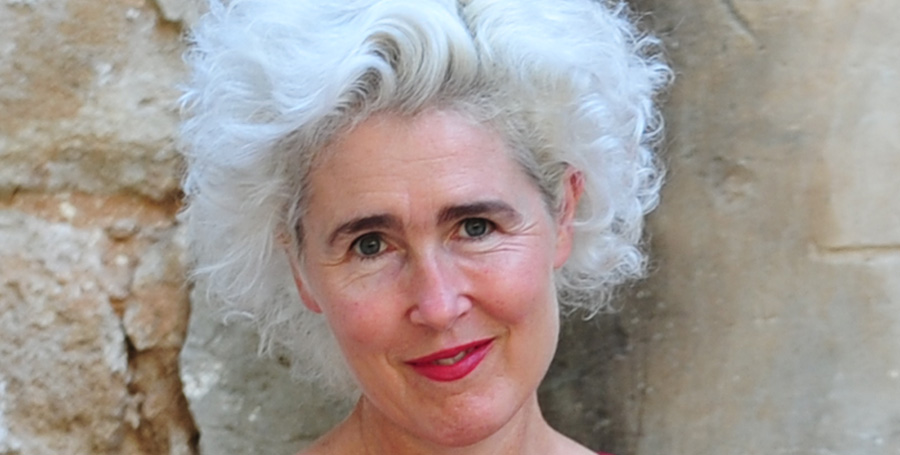 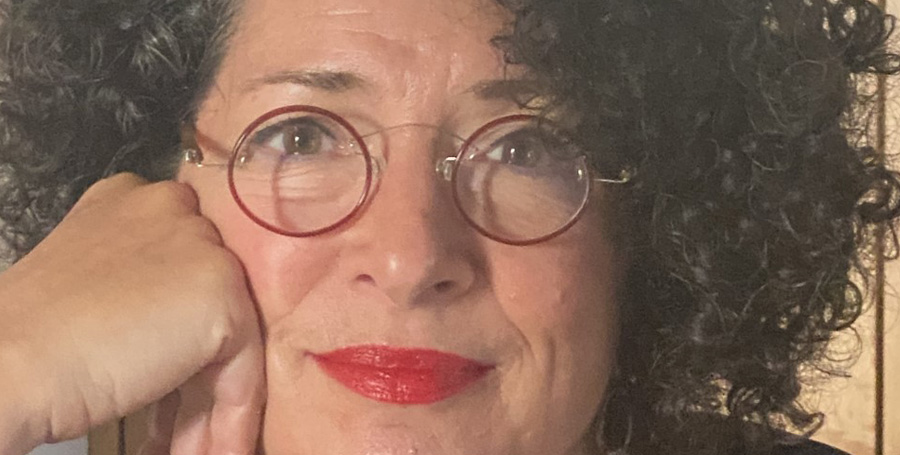 Andi Arnovitz lives and works in Jerusalem, Israel. She is a conceptual artist, using etching, digital information and various printmaking processes, as well as fabric, thread and even porcelain to create both print series, artist books and large-scale installations. These pieces explore various tensions that exist within religion, gender and politics.
Andi has exhibited her work in England, China, the United States, Israel, Spain, Poland, Finland, France, Germany, Lithuania, Canada, Italy, Mallorca and Bulgaria. She has had many one-woman shows and participated in multiple group shows. Her work is in many private collections in both the United States and Europe, as well as major universities, museums and institutions, including the US Library of Congress, the Israel National Library, The Museum of Art in Ein Harod, The Islamic Museum, Yeshiva University Museum, The Museum of the Diaspora, Yale University, UCLA, and The Smithsonian Museum of American History.

Cornelia Renz lives and works in Berlin and Tel Aviv. In her work, she examines cultural role models, and points out that what is considered “natural” is actually socially shaped by these models. As a child of a working class family remote from art, but who introduced her to the culture of Bavarian churches, the preoccupation with Vanitas symbols and the ‘Holy Bodies’ – lavishly ornamented whole-body relics – is an integral part of Cornelia’s work. Recently, she has started to approach her grandmother’s biography, who once could have lived in Jerusalem but remained in Bavaria, and her father’s, who as a Romanian-German entered the SS at 17.
In her artistic practice, Cornelia combines an initially two-dimensional technique with found footage, installations and the works of fellow artists, for example in the solo show “Heimspiel” at Kunsthalle Memmingen and Kunsthaus Erfurt in 2020. She has been awarded the Grant of the Art Cube Artists’ Studios Jerusalem, the Schloss Balmoral Fellowship, the Villa Aurora Fellowship, Los Angeles, and the Schering Foundation Art Award. 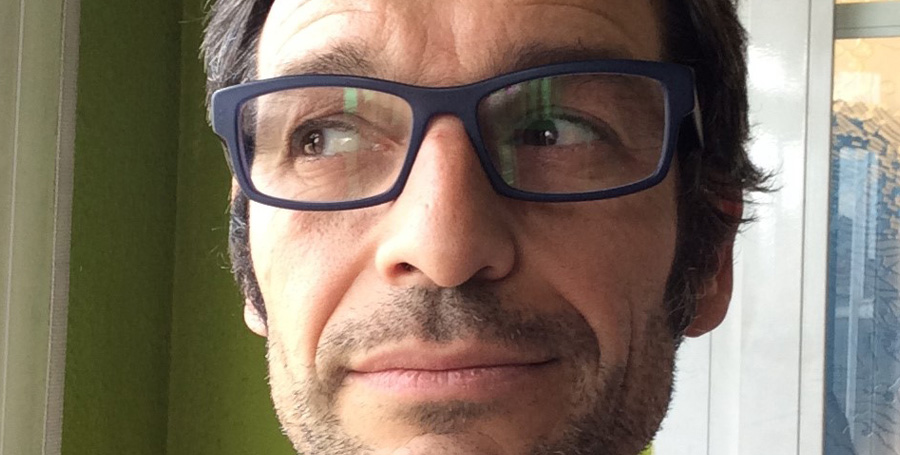 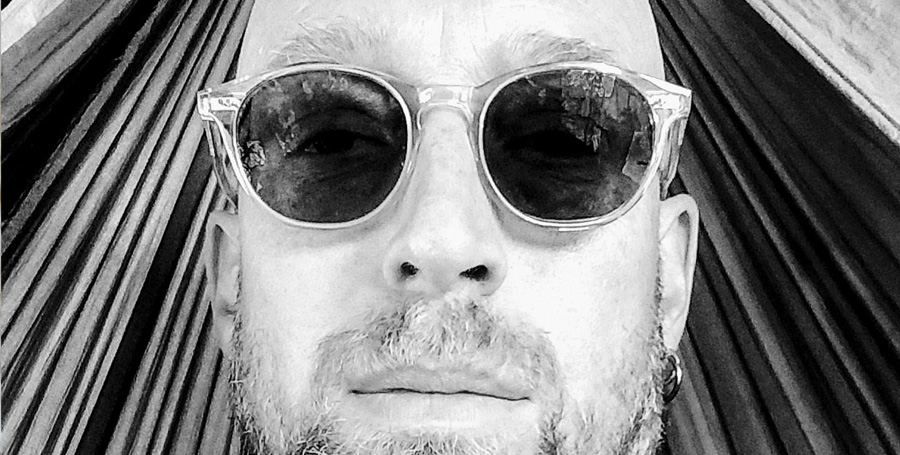 Dan Farberoff is a Swiss-Israeli, Berlin-based interdisciplinary artist and filmmaker, working primarily in mediated physical and digital presence, in site-specific fashion. His works incorporate new media and live presence, and touch on issues of consciousness, embodiment and connection to place. Dan has collaborated with the England National Ballet, the Richard Alston Dance Company and world-renowned choreographers, and his work has been acclaimed at festivals, screened on major television networks, such as ABC or 4 Channel, and presented at the London Olympics. He worked as video artist for the Polish production of LET’S DANCE CHOPIN for Chopin’s bicentennial celebrations. The piece, with large-scale multiple projection for symphony orchestra and contemporary dance performance, in collaboration with Polish composer Janusz Stokłosa, premiered in China in 2010 where it represented Poland at the Shanghai EXPO.

David Behar Perahia is a French-Israeli, Jerusalem-based artist working mostly within a site-specific approach. He researches the notion of place to discover the layers that compose a local context. During David’s processes, he asks questions about the physical process of active perception, the participative “spectator”, and the appropriate use of materials for a given situation. His interventions in site/place/context convey to people a new perspective about their locality and welcome them to establish a strong sense for a place. His most recent projects have evolved through engaging with the people and communities of given locations, establishing an active public participation during various stages of the making. David approaches art from different fields of practice: Physics, Chemistry and Architecture. 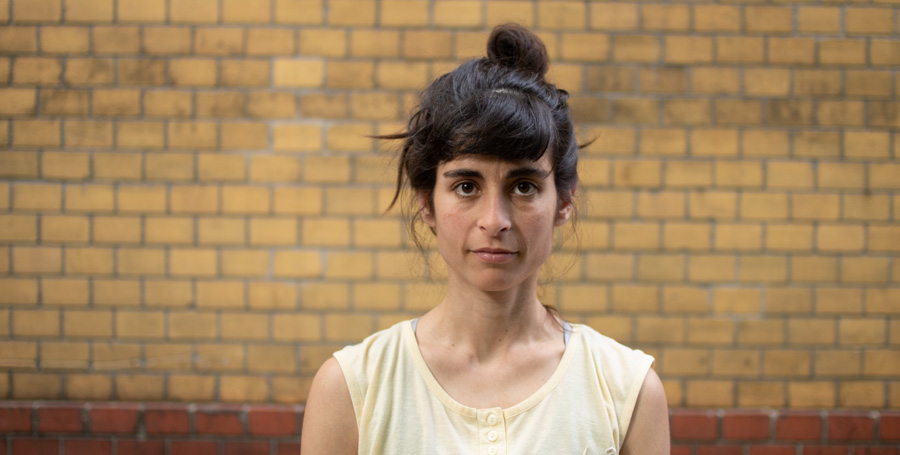 Ilona Marti is a Swiss audio artist, sound and graphic designer who lives and works in Berlin. In her own interactive and intimate audio performances she experiments with perception, irritation and movement. Her works in public space offer unusual perspectives on everyday surroundings. They have been shown at the B_Tour Festival and the Performing Arts Festival in Berlin, as well as at festivals in Tel Aviv/Jaffa, Krasnodar and Odessa. Since 2013, she has been working as a sound designer for the audio performance “Remote X” by Rimini Protokoll in over 30 cities worldwide. As a graphic designer she creates print media for Berlin culture. Ilona completed her studies at the Weißensee Academy of Art in Berlin in the field of Visual Communication and at the Zurich University of the Arts in Trends and Identity. 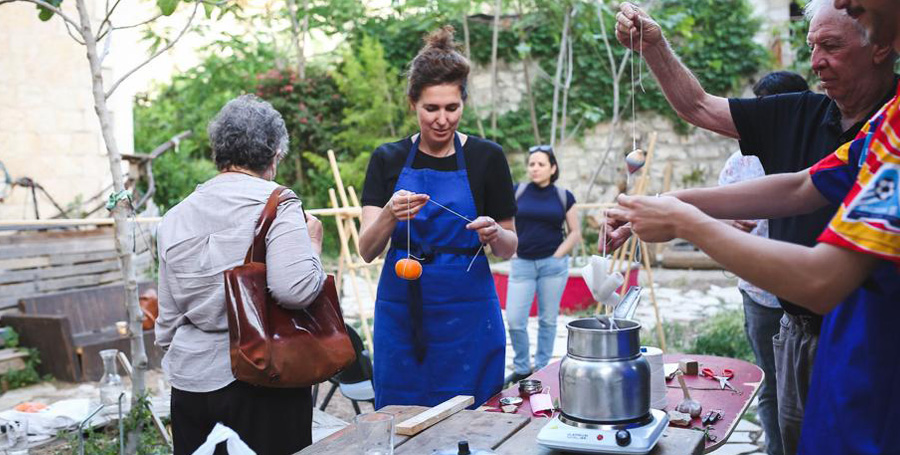 Maya Muchawsky was born in Israel in 1972, and is a visual artist working predominantly with ceramic materials. A graduate of the Bezalel Academy of Arts and Design, Jerusalem (BFA), and of the Royal College of Art, London (MA), she lives and works in Jerusalem and is a senior lecturer at the Ceramics and Glass Department at Bezalel. In her work, Maya aims to convey various expressions of time and temporality while drawing inspiration from her domestic surroundings. Maya has recently been selected to take part in the prestigious visiting artist programme of the Israel Institute, and will be teaching and producing new work in Washington University in St. Louis over the next academic year. She has been the recipient of the Andy prize for contemporary arts in 2013, and of the Clore Foundation scholarship for MA studies at the Royal College of Art, London. She has exhibited in numerous exhibitions locally and internationally, and her works are part of the collections of the Tel Aviv Museum of Art, The Israel Museum Jerusalem, the Israeli Knesset Collection, and private collections in Israel and abroad 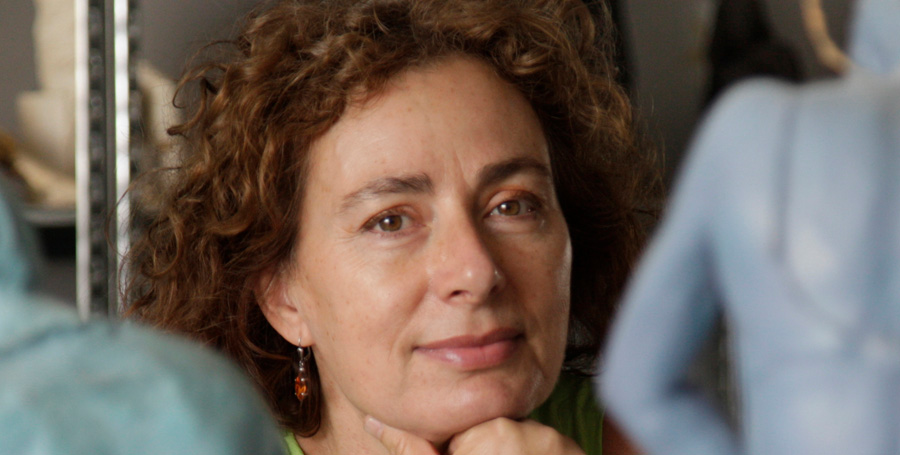 Noa Arad Yairi is an artist based in Jerusalem. She graduated from the Visual Communication department at WIZO Haifa Academy of Design in 1988. Between 1989 and 2007, she managed her own design studio. Noa has been collaborating with the Empty House group and the Musalla Group in artistic ventures in public spaces since 2012. She teaches sculpture in the Emuna Academic College of Art, and is an advisor for projects at the Bezalel Academy of Art and Design.
Since 2009, Noa has been focusing on sculpture and installation. Her work is studio-based as well as site-specific, departing from the historical, cultural and political narrative associated with the place. It has been shown in exhibitions and site-specific projects in Israel and abroad, among which Synecdoche, Tzadik Gallery, Tel Aviv (2011); Infiltration (Beyond the 100 meter radius), performance, He’ara 13, Sala Manca Group (2020); If they show me blood, “The 11th Sybil”, Beita Gallery, Jerusalem (2019); Splitting “Hinter/vor und nach der Mauer” (Behind/before and after the Wall), Klostergalerie Zehdenick, Germany (2019); Absent, “The Schneller Order”, Schneller compound, Jerusalem (2019); The Dream of those who are awake, installation, “Hope”, Rishon LeZion Museum (2019); Jewish Culture Festival in Krakow, “Sambation” (2018); Madonnas, “New Members”, The Jerusalem Artists’ House (2018); Splittings, The 8th Israeli Biennale for Ceramics, Eretz Israel Museum, Tel Aviv (2016). 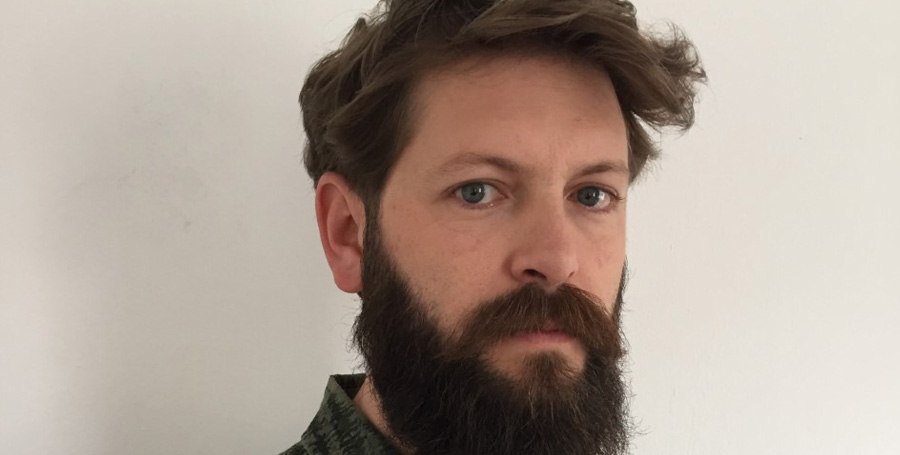 Pablo Cabrera Ferralis is a Chilean architect, writer and mixed media artist based in Berlin and Leipzig. His main field of work is abstract painting and drawing of urban and natural landscapes. His interests usually cross their traditional boundaries towards other artistic disciplines like live painting actions and poetry reading, in order to enlarge his experience and scope of experimentation in the broader artistic field. In the last two years, Pablo mainly worked in fields such as collage, poetry and narrative, reading in poetry events and publishing in independent magazines. He is always looking to participate in collaborative work and build relations between people who want to develop ideas and give them shape and expression. 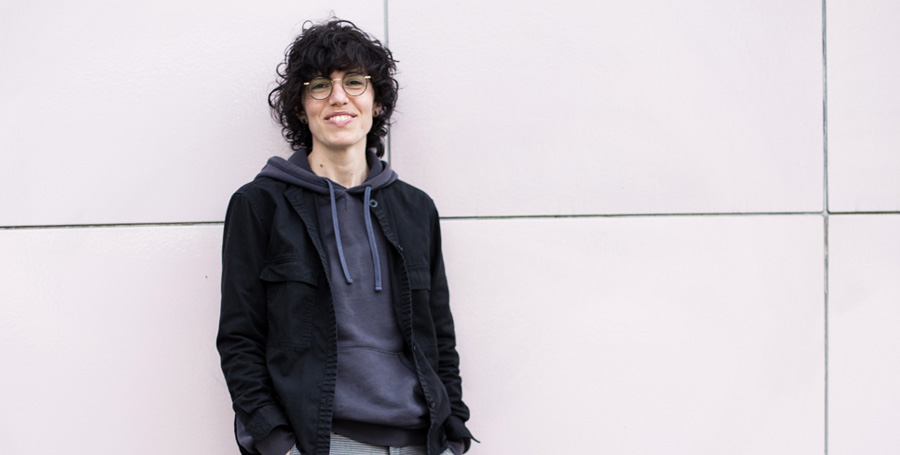 Stein Wexler is a queer Jewish artist and city planner, and a dual citizen of the United States and Germany. Wexler’s work takes place in public urban spaces where she designs and curates artwork that asserts the existence of silenced identities. She is currently investigating Germany’s “Willkommenskultur”, and how that value does (or does not) play out during the bureaucratic immigration process. She is also working on a project uncovering the layers of history beneath Berlin’s Haus derStatistik, in a former model Soviet neighbourhood soon to be recognized as a UNESCO heritage site, but also where a Jewish senior living facility once stood. Previously, Wexler curated public art interventions in downtown Durham, North Carolina USA where she developed the neighbourhood’s first public art programme, and helped shape the city’s public art policy on the City of Durham’s Cultural Advisory Board. Stein is also a studio artist and makes work on paper and with metal.
Stein’s Master’s degree in City and Regional Planning, with a focus on economic development through art, is from UNC Chapel Hill where she was a Parker Fellow and wrote an award-winning master’s project. She received honours in her Bachelor’s from UC Berkeley in English Literature. Born and raised in California, she currently lives in Berlin where she is an Alexander von Humboldt Foundation fellow hosted by Berlin’s Zentrum für Kunst und Urbanistik. 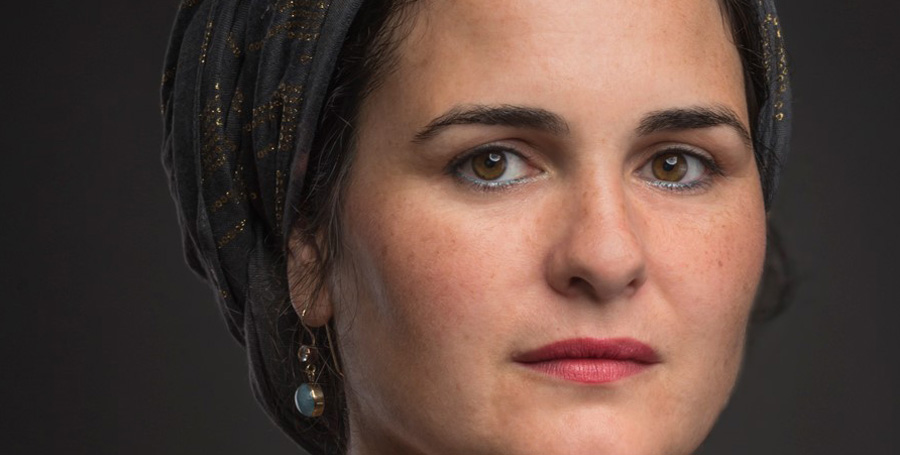 Yael Serlin is an Israeli artist based in Jerusalem. Her work is interdisciplinary and integrates drawing, printmaking, sculpture, installation and video. Yael graduated her Bachelor’s studies with honours from ‘Emunah’ Academic College of Art and Education, and received her Master’s degree from the Faculty of Arts ‘Hamidrasha’ at Beit Berl College. Her works have been exhibited in many group exhibitions locally and internationally. Recently, Yael participated in the prestigious Apexart residency programme in New York and presented a solo exhibition at the Podroom Gallery in Belgrade. In 2020, she received the Ministry of Culture and Sport Award in the field of visual art and design in the category of Young Artist Award.