Voice of Joy and Deliverance. Award of the Jewish Culture Festival in Krakow

The words of Psalm 118 are the motto, the message of the Award that we have given to persons and institutions who support the Jewish Culture Festival in Krakow.

Thanks to their tangible, material generosity and spiritual inspiration, “Voice of Joy and Deliverance resound in the tents of the righteous” (Psalm 118: 15) at the Krakow Festival.

Our Award is an expression of respect and gratitude to those who support us in the work of safeguarding the memory and broadening familiarity with contemporary Jewish culture from Israel and the Diaspora.

Without those generous persons, our festival would not be the same. 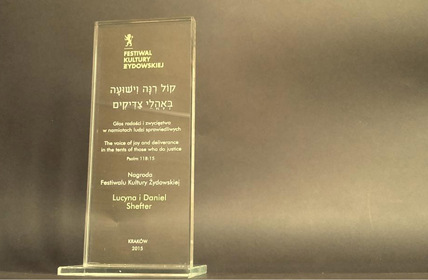 In 2016, the Festival Award got new meaning. Awarded to Karolina Jakoweńko, is now not only a sign of appreciation for those, who support the festival, but also for those, who continue and expand the mission of the festival, that we started back in 1988 by promoting Jewish heritage in a remote places, far from big urban centers.

Recipients of the Festival Award